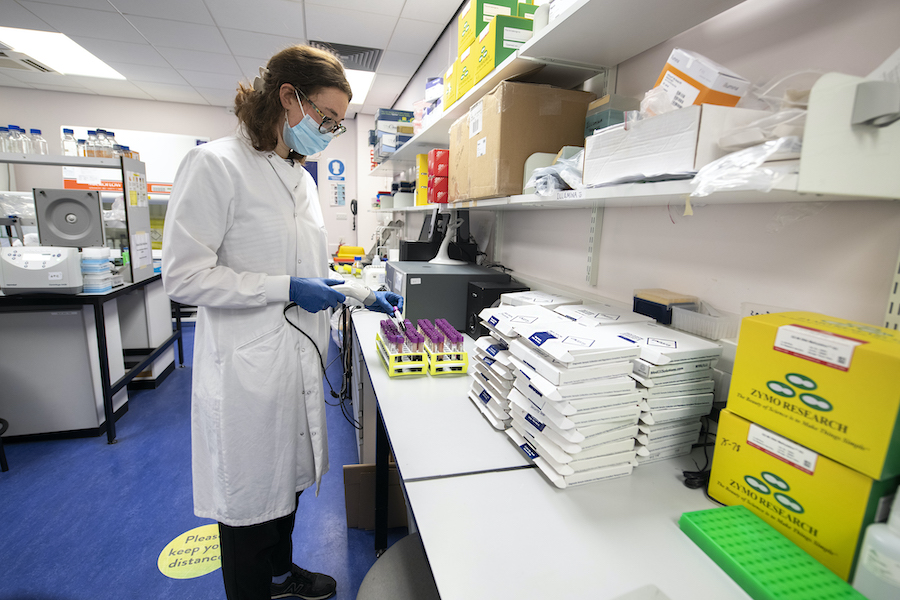 A leading sepsis charity and a groundbreaking research project are marking the start of Sepsis Awareness Month (1 September 2022) by announcing a new pilot study which will provide invaluable data needed to improve treatments for sepsis patients.

Sepsis is a deadly condition which takes the lives of approximately five people every hour in the UK. It occurs when the body’s response to an infection spirals rapidly out of control, injuring its own tissues and organs which can result in multiple organ failure and death.

Sepsis Awareness Month, which includes World Sepsis Day on 13 September, takes place every September. The charity Sepsis Research FEAT kicked off the month with a visit to the GenOMICC research study at the University of Edinburgh’s Roslin Institute to celebrate its brand new pilot study, GenOMICC Acute. They were joined by charity supporters Adam Liddle, who lost his wife Emma to sepsis in 2020, and Aimee King, whose son Corey was 18 months old when he almost died from sepsis in 2021.

GenOMICC – a global collaboration to study genetics in critical illness led by University of Edinburgh in partnership with Genomics England – researches how genes can influence the body’s response to conditions such as sepsis. It uses DNA samples from patients in over 200 intensive care units (ICUs) throughout the UK and has gathered over 19,400 DNA samples to date.

Sepsis Research FEAT, a UK sepsis charity dedicated to funding research alongside raising awareness of the life threatening condition, has supported GenOMICC since 2018. The charity is now increasing investment to financially support GenOMICC to expand and accelerate recruitment to GenOMICC Acute, a pilot study in which additional blood samples will be obtained from patients shortly after ICU admission. The study will expand the number and type of blood samples taken and has the added pressure of sample collection within a time-critical window of 48 hours. The samples will help researchers gain insight into what happens within a patient’s body when they are at their most critically ill. It will provide invaluable data needed to improve treatments and optimise outcomes for sepsis patients.

Professor Kenneth Baillie, the GenOMICC study’s chief investigator and a Consultant in Critical Care Medicine at University of Edinburgh, said: “I'm very excited by the GenOMICC Acute pilot study. It is something that we have wanted to do for a long time but is happening now because of the vision of Sepsis Research FEAT and their willingness to fund something high risk but potentially transformative.

“In GenOMICC Acute, we’re looking deeper into the mechanisms by which genetic changes influence the function of the immune system. By taking samples from patients shortly after their arrival in the intensive care unit, we can see in extraordinary detail the molecular events that are happening in the immune cells of patients with sepsis and relate that directly to their genome. Testing the methodology with this pilot study will show us the potential to look deeper into the consequences of genetic variation and help us to translate those DNA genetic signals into treatments.”

Colin Graham, Chief Operating Officer at Sepsis Research FEAT, commented: “Sepsis is a medical emergency. It is a devastating condition that can kill a previously healthy adult in hours. The biological processes that cause it are not understood and that is why more research is urgently needed. The research carried out by the GenOMICC team, led by Professor Kenneth Baillie, is playing a crucial role in the fight against sepsis.”

This Sepsis Awareness Month, Sepsis Research FEAT is running a fundraising campaign called ‘Give us 5!’, which also highlights the five key symptoms of sepsis. These include:

If someone has any of these symptoms, becoming noticeably worse, this could indicate sepsis and urgent medical attention should be sought. In order to highlight the five key symptoms of sepsis and also recognise the five lives tragically lost to sepsis every hour in the UK, supporters across the country are being encouraged to give five of something – this could be giving five minutes or hours of their time, taking part in a fundraising activity covering five miles on land or on water, or raising or donating £5, £500 or even £5,000. Find out more about Sepsis Awareness Month and how to get involved at sepsisresearch.org.uk/sepsis-awareness-month-2/

In Scotland, Sepsis Research FEAT has also launched a new national awareness campaign in partnership with the Scottish Government. This is their first joint campaign since before the COVID-19 pandemic. More information is available at sepsisresearch.org.uk/national-awareness-campaigns