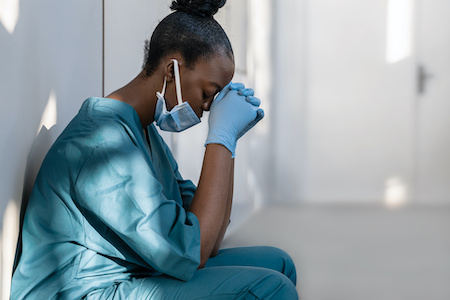 Black and minority ethnic (BME) doctors are less likely than their white counterparts to report improvements in workplace teamwork during the coronavirus pandemic, according to a report published by the General Medical Council (GMC).

Most UK doctors, BME and white, say that, despite the pandemic’s huge impact on healthcare, there have been positive impacts, such as teamwork and knowledge and information sharing.

But positive experiences are not shared equally by BME doctors compared to white colleagues, backing calls for all doctors to receive better support in the workplace.

The findings are from a survey published as part of the GMC’s annual The state of medical education and practice in the UK report. It found that, despite the pressures caused by COVID-19, 89% of doctors experienced at least one positive change during the pandemic.

But BME doctors were less likely to share the positive experiences reported by many of their white counterparts:

Charlie Massey, the GMC’s chief executive, said: "This continues to be an incredibly challenging time for UK health services, and the hard work and commitment shown by healthcare professionals has been humbling. But it remains a concern that where there have been positive impacts on workplaces, BME doctors were less likely to experience them than their white colleagues.

"We know BME doctors too often lack the supportive and compassionate leadership that is required to thrive. Doctors of all grades, and from all backgrounds, need and deserve the same levels of support if they are to provide the best possible care for patients, in what will continue to be difficult months ahead."

A representative sample of more than 3,600 doctors completed the GMC-commissioned survey, which asked about experience of working during the first peak of the pandemic in the spring, as well as in 2020 more generally.

Coronavirus had a widespread impact on doctors’ working lives, with 81% experiencing significant changes to their work and 42% being redeployed.

Compared to a similar survey in 2019, a greater proportion of doctors reported being able to cope with their workload, and fewer reported being at high risk of burnout. This was due in part to elective procedures being postponed or cancelled during the first wave of the pandemic.

Charlie Massey added: "This has been a year like no other, but the challenging situation will last for some time yet and there are issues that healthcare leaders must address. Compassionate and supportive leadership is key, for patients as well as doctors, and this is the case now more than ever. We must all build on the flexible approach that has been a necessity this year."

The GMC’s 2020 The state of medical education and practice in the UK report is available online.

A proud member of the Arjo family, Huntleigh has been committed to supporting healthcare professionals in improving outcomes and enhancing patient wellbeing since 1979. We do this through our proven solutions for Vascular Assessment & Treatment and Fetal & Patient Monitoring.