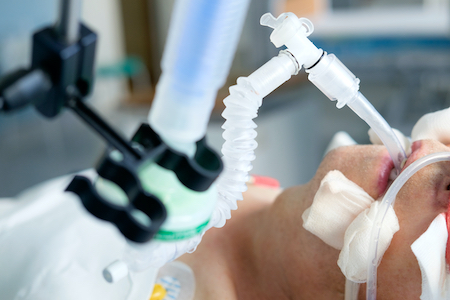 A National Patient Safety Alert has been issued on the risk of foreign body aspiration during intubation, advanced airway management or ventilation.

Foreign body aspiration can occur if loose items are unintentionally introduced into the airway during intubation, ventilation or advanced airway management. This can lead to partial or complete airway blockage or obstruction, and if the cause is not suspected, can be fatal.

Over a six-year period, the NHS England and NHS Improvement patient safety team identified five incidents where a foreign body (FB) was aspirated, and a further four incidents where the FB was identified during intubation and removed. The most common types of FB identified in incident reports were transparent backing plastic from electrocardiogram (ECG) electrodes and plastic caps of unclear origin. This is likely to be an under-estimate of the true number of incidents as many may go unrecognised.

During an investigation it was also identified that:

• Some breathing circuit components with untethered caps are still available to purchase.

• Airway trays for routine or planned procedures are frequently prepared in advance, but left uncovered, and as a result loose FBs may become attached to breathing system devices.

• The ends of breathing system hoses are not routinely closed between patient cases, allowing the potential for loose plastic objects to enter the breathing hose system.

The alert asks providers to reduce the risks by purchasing safer alternative equipment without loose and transparent parts. Providers are also asked to develop or amend local protocols to ensure pre-prepared intubation and advanced airway management devices are covered or protected until use; and that the ends of reusable breathing system hoses are closed between patient cases.

Failure to take the actions required under the National Patient Safety Alert may lead to CQC taking regulatory action. The alert can be accessed here.

One third of surgeons and nurses experience harmful allergic reactions