Most are comfortable with treatment during pandemic 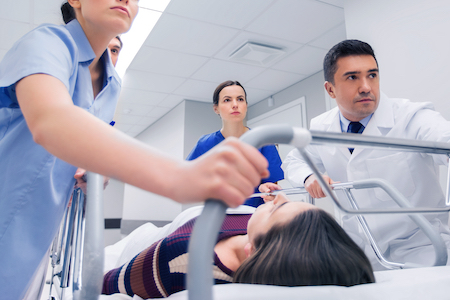 A ​Medical Technology Group survey shows that patients are embracing technology during the COVID-19 pandemic, but still value real-life consultations.

Most patients (59 per cent) would feel comfortable going to hospital for an operation or treatment despite the COVID-19 pandemic, a survey of over 400 patients by the Medical Technology Group has revealed.

Younger patients are more comfortable with the prospect of attending a hospital appointment than their elders, with nearly eight out of ten 18-34 year olds (75 per cent) stating that they were ‘extremely’, ‘very’ or ‘somewhat’ comfortable, compared to 59 per cent of those aged 65 and older.

Nearly two-thirds (62 per cent) of patients surveyed had either had a procedure - such as surgery, an investigation, or a treatment, or a GP or outpatient appointment postponed in the previous six months. Instead, the vast majority (85 per cent) had experienced some form of communications technology, such as a telephone or online video consultation since the start of the COVID-19 pandemic.

Over two-thirds (67 per cent) found the experience of using this technology to be positive, describing it as either ‘excellent’ or ‘good’. Six out of ten (58 per cent) said that communications technology compared favourably with face-to-face contact with their clinician, citing benefits such as eliminating the risk of infection (79 per cent) and avoiding the need to travel (75 per cent), as well as it being cheaper (42 per cent). However, half of patients said they did not feel like they received a proper consultation (50 per cent) and a quarter (27 per cent) missed the social interaction.

Among those respondents who had experienced another form of medical technology such as a joint or heart valve replacement, cardiac stent, or surgical cancer treatment like radiotherapy (136 out of 401 respondents), eight of ten (78 per cent) said that it has a ‘great deal’ or ‘a lot’ of impact on their life. Other findings from the research include:

Barbara Harpham, chair of the MTG, said: “This research clearly shows that patients value the role that medical technology has played during the COVID-19 pandemic. While virtual consultations are a good substitute for face-to-face appointments for discussing medication, referrals, and minor ailments, when it comes to diagnosis or physical examinations, there is no substitute for face-to-face appointments. More work needs to be done to determine precisely how this technology is used to help in the future.

“Patients’ experience of wider medical technology is extremely positive. It shows the role that medtech can play in getting the NHS back up and running, harnessing its benefits to build a better health service. Used properly, medical technology can get patients back to normal life quicker, make the NHS more efficient, and benefit society as a whole.”