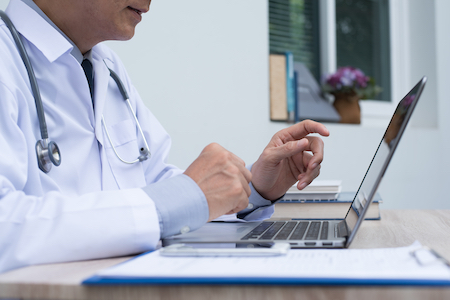 More than 90% of doctors said they hadn’t recently conducted any outpatient consultations by video but 70% thought that at least some could be carried out in this way, according to a survey conducted by the Royal College of Physicians (RCP).

The RCP recently asked its members about new ways of caring for patients, as well as looking at what barriers they currently face, apart from issues concerning workforce. Only just over half of respondents (53% for inpatients and 55% for outpatients) said they are able to provide the level of care they are trained to provide.

Insufficient time, lack of support from hospital management and lack of social care provision were selected as the main barriers to providing inpatient care. Poor appointment systems featured highly when it came to outpatients. Fewer than half of respondents said that facilities for inpatients or outpatients are excellent or good.

The RCP’s ‘Barriers to Care’ survey asked about alternatives to face to face consultations, which enable patients to avoid the inconvenience of having to travel to hospital, in some cases having to repeat the process because a referral has been misplaced, or another is needed.

Professor Andrew Goddard, President of the Royal College of Physicians, said: “Doctors and other healthcare workers all want to provide the best care possible for their patients and face some familiar and long-standing barriers to doing so.

“One way in which the NHS can meet the rising demands placed upon it is to provide care in new and innovative ways. Given the pressures they are under and, in many cases, the poor IT infrastructure they have to work with, it isn’t altogether surprising that more doctors aren’t already conducting consultations using video and other technological solutions, but there is enthusiasm for change and the RCP will continue to work with NHS England to transform services.”