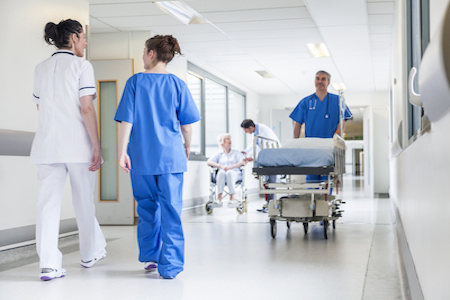 The latest mid-year figures published by the Nursing and Midwifery Council (NMC) reveal the number of nurses, midwives and nursing associates on its register is at an all-time high of 706,252. However, the Royal College of Nursing warns that the increase could be "short term" unless there is increased investment and greater efforts to attract more students into the profession.

Following on from the NMC’s annual data report published earlier this year, the six month period between 1 April and 30 September has seen an overall increase to the register of 8,015 (1.15%) people – more than double that for the same period in 2018 when the register grew by 3,340 (0.48%) individuals.

Broken down by each professional role, the figures reveal the number of nurses on the register has grown by 6,669 (1.02%) while the number of midwives has grown by 339 (0.92%). At the end of September this year there were 1,488 nursing associates registered to work in England – up from 489 in March, following the opening of the register in January 2019.

The number of professionals trained in the UK and registered to work has risen from 591,894 to 596,906 – an increase of 5,012 (0.85%) – between 1 April and 30 September. This has been driven by an increase in those joining the register for the first time and fewer people leaving.

While the overall number of people registered to work has continued to grow, the data does highlight the fall in the number of professionals coming from the EU / EEA, which declined a further 1,062 (-3.21%) from 33,035 to 31,973 between 1 April and 30 September.

Commenting on the mid-year registration figures, Andrea Sutcliffe CBE, Chief Executive and Registrar at the NMC, said: “It’s important we recognise the enormous contribution that nursing and midwifery professionals from overseas continue to make for people in the UK. It’s clear they are a vital part of our UK health and care workforce, and I’m glad to see the recent changes we’ve made to streamline our processes for those joining the register from outside the UK are making a real difference.

“But the reality is, even with this considerable mid-year growth, there are still serious shortages across the health and care sector – not least in specialist areas such as mental health and learning disabilities. With so many on our register nearing retirement age, it’s more important than ever that partners across the system work together to tackle the important issue of recruitment and retention of the essential nursing and midwifery workforce.”

Responding to the data, the Royal College of Nursing (RCN) commented that the small increase comes against a backdrop of rising vacancies in England. RCN pointed out that the number of nurses on the register in Northern Ireland has fallen, demonstrating the extent of the shortage and the urgent need for action to address the recruitment and retention crisis in certain georgraphies. It also said that there has been a net loss from the register of more than 1,000 nurses from EU countries in the last six months.

The RCN commented that "the government risks deterring future overseas nurses from working in the UK by increasing the Immigration Health Surcharge from £400 to £625." The RCN believes that nursing staff, who already pay for the NHS through income tax and National Insurance, should be exempt from paying this charge. It added that the NMC figures show that "a huge effort is needed to attract more students onto nursing degrees."

The number of nurses nearing retirement age is now outstripping those under 30 and there has been a 25% drop in applications to study nursing since 2016, when financial support for such students ended in England. The RCN is calling for both tuition fees and maintenance grants to be funded by the government for all nursing students in England.

Dame Donna Kinnair, RCN Chief Executive & General Secretary, concluded: “Unless investment is forthcoming, the overall increase will be short term and once again leave patients missing out on the care they need.”

We provide a comprehensive range of medical decontamination services to service, validate and repair decontamination equipment in NHS and private hospitals & dental practices, laboratories & universities throughout the UK. Privately owned, we are the largest specialist independent maintenance and validation company in the UK medical decon industry.