Proton therapy as effective as standard radiation with fewer side effects 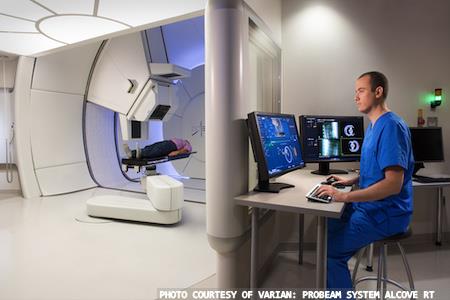 Cancer patients who receive high-tech proton therapy experience similar cure rates and fewer serious side effects compared with those who undergo traditional X-ray radiation therapy, according to a study led by Washington University School of Medicine in St. Louis and the Perelman School of Medicine at the University of Pennsylvania.

The reduction in side effects, particularly lower hospitalisation rates and fewer emergency room visits, could offset the higher initial cost of proton therapy, according to the researchers.

"We observed significantly fewer unplanned hospitalisations in the proton therapy group, which suggests the treatment may be better for patients and, perhaps, less taxing on the healthcare system," said first author Brian C. Baumann, MD, an assistant professor of radiation oncology at Washington University and an adjunct assistant professor of radiation oncology at Penn. "If proton therapy can reduce hospitalisations, that has a real impact on improving quality of life for both patients and caregivers."

While radiation therapy can be curative for certain cancers, it also causes severe side effects that reduce quality of life and can, in some cases, require hospitalisation, said Baumann, who treats patients at Siteman Cancer Center at Barnes-Jewish Hospital and Washington University School of Medicine.

The study, which included almost 1,500 patients from Penn Medicine, is the first large review of data across several cancer types, including lung, brain, head and neck, gastrointestinal and gynaecologic cancers, to show a reduced side effect profile for proton therapy compared with X-ray radiation therapy for patients receiving combined chemotherapy and radiation. None of the patients had metastatic cancer.

The study was supported by research funds from the University of Pennsylvania.

We provide a comprehensive range of medical decontamination services to service, validate and repair decontamination equipment in NHS and private hospitals & dental practices, laboratories & universities throughout the UK. Privately owned, we are the largest specialist independent maintenance and validation company in the UK medical decon industry.