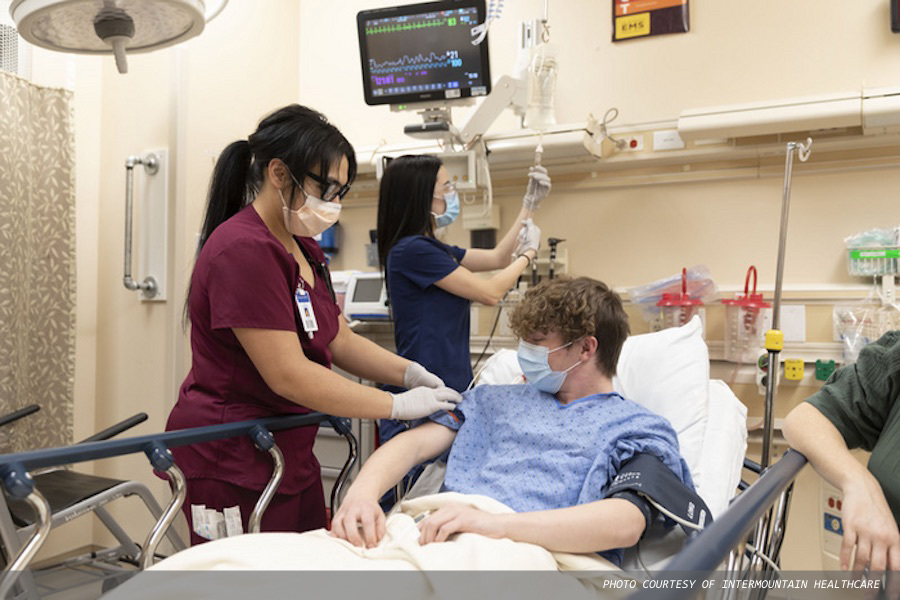 A new study by researchers at Intermountain Healthcare in Salt Lake City finds there may be a better and safer treatment option for emergency department and hospital patients than saline solution, which is used as an IV fluid and is one of the most prescribed medical therapies.

In a new study of nearly 150,000 hospital patients, Intermountain Healthcare researchers found that patients who received lactated Ringer (LR) solution instead of normal saline for IV fluids had a lower risk of kidney injury and death than when they were given saline.

Intermountain researchers found that patients who were given lactated Ringer solution for fluid replacement as an alternative to saline solution had a 2.2% reduced risk of kidney injury and death.

“That might not sound like a big difference but considering how many patients receive IV fluids every day, it could lead to a major improvement in health outcomes,” said Joseph Bledsoe MD, principal investigator of the study and director of research for emergency medicine for Intermountain Healthcare. “For the US health system alone, that’s 3,000 people every year who may avoid complications from normal saline, at no additional cost.”

In the large-scale Intermountain study, results of which were published in JAMA Network Open, researchers encouraged clinicians, through education and electronic order entry alerts, to use lactated Ringer solution rather than saline solution for IV fluid treatment.

Saline solution is a combination of sodium chloride and water at a concentration of 9 grams of salt per litre (0.9%) which are levels higher than blood, commonly called normal saline.

Mounting evidence points to intravenous normal saline solution increasing the risk of metabolic acidosis, acute kidney injury, and death. Researchers say this is most likely due to normal saline having higher levels of chloride and being slightly more acidic than fluids in the human body.

Lactated Ringer solution and normal saline contain different ingredients that affect how they work in the body. Both are used for replacing fluids and electrolytes in hospital patients who have low blood volume or low blood pressure.

The study included 148,423 adult patients admitted to the emergency department or inpatient units at 22 Intermountain Healthcare hospitals in Utah and Idaho between November 1, 2018, and February 29, 2020.

At 30 days post treatment, researchers found a 2.2% reduction in major adverse kidney events, including persistent kidney dysfunction, new initiation of dialysis, and death in patients who were given lactated Ringer solution rather than normal saline solution during their emergency department or hospital treatment course.

The impact was even greater on patients with sepsis, a severe infection, and patients who received more fluids as part of their treatment. Not all patients benefit from Lactated ringer solution, in particular patients with brain injury may still benefit from normal saline, but further studies are needed.

Researchers found that nudges in the Intermountain electronic order system were more effective in changing clinician habits than relying on education.

"Our success could be replicated in other health systems,” said Dr. Bledsoe. “Given the scope of this study, and its success in addition to previous studies, hospitals around the country should consider what they use for IV fluids, too.”

In an editorial about these findings published in the same issue of JAMA Network Open, Matthew W. Semler, MD, MSc, assistant professor of medicine at Vanderbilt University Medical Center, wrote that the study “raises important questions about the choice between Ringer’s lactate solution and saline and, more broadly, how we should make evidence-based choices between widely available, commonly used treatment alternatives in acute care.”