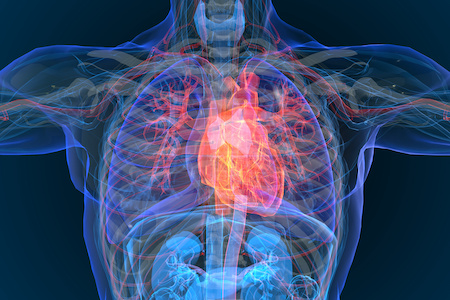 A new study reports that emergency heart attack treatment is effective in patients with cancer, yet many do not receive it.

This was the first study to compare the rates of primary percutaneous coronary intervention (PCI) in heart attack patients with and without cancer, and to examine the comparative effectiveness and safety of treatment.

“These findings have significant implications for patients with cancer,” said author Dr. Mohamed O. Mohamed of Keele University, UK. “The results should prompt cardiologists to offer the same intervention given to those without cancer, with the knowledge that it is equally effective and safe.”

PCI is a life-saving treatment for patients with heart attacks. It involves putting a stent in a blocked artery to restore blood flow to the heart. Ideally the procedure should be performed within two hours to minimise damage to the heart muscle.

“Primary PCI is the standard of care for heart attack patients, but there is anecdotal evidence that patients with cancer are undertreated,” said Dr. Mohamed. “There is uncertainty about whether cancer patients experience similar benefits from primary PCI compared to those without cancer – an area for which there is little evidence, since cancer patients are often excluded from clinical trials.”

The study was conducted using the National Inpatient Sample, a database of hospitalised patients in the US. The analysis included more than 1.8 million adults admitted between 2004 and 2015 with an ST-elevation myocardial infarction (STEMI), where an artery supplying blood to the heart is blocked. Patients were stratified by the presence or absence of the five most common cancers, which are blood cancer (leukaemia, lymphoma, multiple myeloma), breast, colon, lung, and prostate cancers.

To assess the effectiveness of treatment, the researchers examined the occurrence of all-cause
death, stroke, or cardiac complications while in hospital.2 To assess safety, they examined rates of major bleeding during the hospital stay.

The researchers found that the effectiveness of primary PCI in the cancer groups was at least equal to, or in some cases greater, than in the no cancer group. Among patients who underwent primary PCI, the probability of major bleeding was higher in those with cancer than those without. However, among those with cancer, there was no difference in major bleeding between those who received primary PCI and those who did not – indicating that the intervention was not associated with an increased risk of bleeding.

“The results indicate that heart attack patients should receive primary PCI regardless of whether or not they have cancer,” said Dr. Mohamed. “Some patients with cancer are at elevated risk of bleeding and it was reassuring that the intervention did not result in an increased risk of bleeding events.”

He noted that after PCI, patients receive antiplatelet medication (a type of blood thinner) and the duration depends on the type of stent implanted. “Given the concerns about bleeding in some patients with cancer, more data are needed on the most appropriate stents and length of treatment with antiplatelets,” he said. “Our study assessed in-hospital outcomes, which are important landmarks, but longer-term follow-up is needed in this high risk and yet understudied population.”

The study was published in European Heart Journal – Acute Cardiovascular Care, a journal of the European Society of Cardiology (ESC). Established in 1988, Unisurge is a trusted manufacturer and supplier of practitioner-specified procedure packs, dressing packs, medical disposable and theatre products to health care professionals. Our range of bespoke single use products is both cost effective and patient specific.