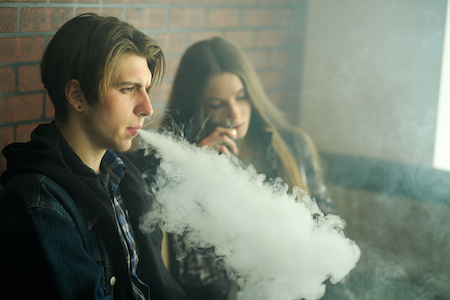 In adolescents the use of e-cigarettes doubles the risk of starting to smoke traditional cigarettes, states a position paper published in the European Journal of Preventive Cardiology, a journal of the European Society of Cardiology (ESC).

“Vaping is marketed towards teenagers and the tobacco industry uses celebrities to promote it as being healthier than smoking,” said senior author Professor Maja-Lisa Løchen of UiT The Arctic University of Norway, Tromsø.

“Legislation on the marketing and sales of e-cigarettes varies enormously between countries,” said Professor Løchen. “Action is urgently needed to halt the growing use in young people. The World Health Organization (WHO) states that e-cigarettes are harmful to health.”

Studies have reported that e-cigarette use in young people has increased from 5% in 2013 to nearly 25% in 2018. Up to 5% of adults use e-cigarettes, with wide variation between countries.

The position paper of the European Association of Preventive Cardiology (EAPC), a branch of the ESC, focusses on the cardiovascular effects of e-cigarettes – including devices that look like cigarettes and refillable vaporisers that do not look like cigarettes. It calls on regulators to protect young people by limiting sales and advertising and banning sweet flavours which teens believe are less harmful.

Research has shown that e-cigarettes raise blood pressure and heart rate, change the artery walls so that they become stiffer and less elastic, and inhibit the function of blood vessels by damaging their lining. Each of these four effects are risk factors for blood clots and fatty build-up inside artery walls which can cause heart attacks. A study last year found a link between e-cigarettes and heart attacks.

On top of the heart effects, evidence is accumulating that vaping has negative effects on the lungs and is detrimental to the developing foetus during pregnancy. Preliminary research indicates that e-cigarettes could cause cancer.

It’s not clear whether e-cigarettes can help people quit smoking, since studies have produced conflicting results. “When these studies are pooled together it does not show that e-cigarettes are more effective than conventional, well-tested stop smoking methods,” said Professor Løchen. “In addition, people who use e-cigarettes for smoking cessation often end up being double consumers of both traditional tobacco cigarettes and e-cigarettes.”

“E-cigarettes should only be used for smoking cessation if nothing else has worked and the individual is carefully monitored for adverse effects,” she added.

Professor Løchen concluded: “E-cigarettes are a relatively new product and the long-term health effects are unknown. Now is the time for politicians and regulators to act – with public health campaigns to increase awareness and legislation to halt uptake in young people.”

Olympus UK & Ireland is a subsidiary of Olympus Europa SE & CO. KG. Located in Southend-on-Sea, in the county of Essex, (with sites nationwide) the company is responsible for marketing and sales within the British and Irish markets as well as for the development and manufacturing of medical and industrial equipment for worldwide distribution.