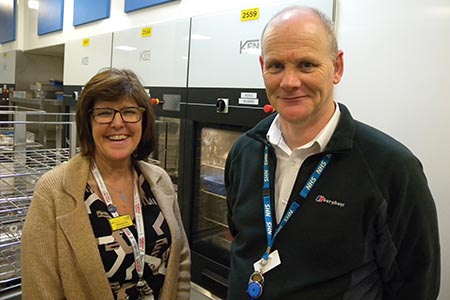 Queen’s Hospital in Burton-on-Trent required urgent investment to upgrade its sterile services facilities, following an audit by a UK national standards body, which identified a lack of independent monitoring systems as  a significant issue, requiring urgent attention. The hospital’s ageing, single chamber  washer-disinfectors had also reached the end of their working life, which meant that Queen’s Hospital had to find a solution – fast.

The hospital had previously purchased a number of single chamber washerdisinfectors from another NHS hospital, whose service was being privatised.

“Their washer-disinfectors would have been scrapped. It was a big saving at the time, and we were able to recycle the old washers,” explained Wendy Kirk, decontamination lead and sterile services manager. “The machines were three years old when they were first installed here, and the maintenance team did a sterling job of keeping them going. However, we started to find that we couldn’t get the replacement parts required for the old machines and we failed a BSI audit, as there was no independent monitoring system fitted.”